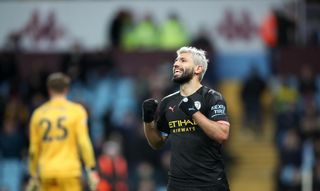 The striker’s treble in City’s 6-1 thrashing cemented his place as the league’s all-time overseas top scorer.

He has now scored 177 goals – from 255 league games – to overhaul Thierry Henry’s mark of 175 after a clinical performance at Villa Park.

Goals from Aguero, Gabriel Jesus and Riyad Mahrez with two had put Pep Guardiola’s side 4-0 up at half-time in a one-sided contest.

The visitors dismantled their hosts to move up to second in the Premier League.

They are 14 points behind leaders Liverpool, with their hopes of defending their title all but over, but the champions underlined their quality with a devastating performance on Sunday.

Villa had slipped into the relegation zone before the game after Watford’s win at Bournemouth and fell to their sixth defeat in nine top-flight outings.

They rolled over to suffer their heaviest home defeat in the league for almost four years, despite Anwar El Ghazi’s injury-time penalty.

A point would have lifted them out of the bottom three, but the tone was set early as City camped inside the hosts’ half.

The visitors probed and Joao Cancelo sliced wide before they were rewarded with Mahrez’s quickfire double.

After 18 minutes the winger collected the ball on the right and skipped past Danny Drinkwater’s weak challenge on the edge of the box.

Mahrez continued into the area and, when Villa retreated, beat Orjan Nyland at his near post.

Six minutes later Villa’s fragility at the back was obvious when they failed to clear, David Silva robbed Drinkwater, making just his second start in 22 months, and Mahrez hammered in from 10 yards.

City were a class above the struggling hosts and, after Jesus fired over, Aguero made it 3-0 after 28 minutes.

It was again too easy for Guardiola’s side as, after collecting Kevin De Bruyne’s pass, the striker rifled into the top corner from the edge of the box.

City were relentless – although Villa offered little resistance – and Aguero shot over before Silva curled a free-kick inches wide.

It was no surprise, though, when Jesus made it 4-0 in first-half injury time when he fired in across Nyland after De Bruyne’s superb low cross.

There was no let-up from City in the second half and Aguero grabbed his piece of history 12 minutes after the break.

The 31-year-old held off the flimsy challenges of Ahmed Elmohamady and Tyrone Mings before firing into the bottom corner.

Imminent new Villa signing Pepe Reina watched from the stands as City tore his future team-mates apart and Mings cleared off the line from Jesus before Nyland stopped Cancelo’s drive.

Nyland saved Jesus’ low effort and, with 12 minutes left, the striker should have added a sixth instead of firing over.

But Aguero did make it 6-0, bagging his hat-trick – and with it another record – in the 81st minute.

Villa’s slapdash defence continued to flounder and, when Mahrez was gifted the ball, he found Aguero to smash in from 10 yards.

The hosts did get the barest of consolations in added time, El Ghazi scoring from the spot after Ilkay Gundogan tripped Trezeguet, but there was no cause for celebration.