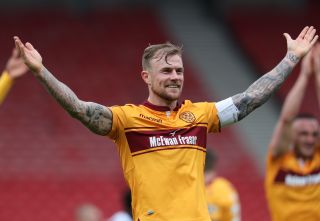 New St Mirren signing Richard Tait has revealed his disappointment with the way his Motherwell career ended after the club tried to renegotiate terms on a contract he had already signed.

But the 30-year-old had expected to be staying on at Motherwell after signing his part of the contract in March.

“It was quite a complicated ending to my Motherwell career I guess,” he told BBC Radio Scotland’s Sportsound.

“Just as lockdown happened I was in talks for a new contract. I actually signed a contract for Motherwell Football Club and I didn’t really hear anything for a couple of weeks.

“I called back up and asked if the contract had been processed. They replied they would have to wait and see if the league was going to be finished and if they were going to finish third.

“It was a bit of a wait, the league finished, Motherwell finished third and got a European spot, so I thought that would be the contract signed.

“They rang me back and pretty much tried to change terms, and that’s how it ended. I pretty much walked away in principle.”

Tait, who could be joined in Paisley by Mark O’Hara, who was on loan at Motherwell from Peterborough last season, added: “I was taking a risk leaving. The pandemic was still in full force and it was unclear when the season would start.

“I felt they were taking advantage of a bad situation. I took a risk and luckily for me it worked out. I am happy to sign for St Mirren.

“I went up a couple of weeks ago to meet Jim and see the training ground. It’s a fantastic facility. After that meeting it was just trying to agree personal terms and I was delighted to sign.”

"He's a model professional, gives his all on every occasion and I've no doubt the St Mirren fans will take to him instantly."— St Mirren FC (@saintmirrenfc) June 20, 2020

Tait made almost 150 appearances for Motherwell and played in two cup finals for the Lanarkshire side.

He said: “I have no ill feeling towards the club… maybe a few people I thought I could rely on to keep me more in the loop than what happened. To not get a phone call back was a bit disappointing.

“But nothing surprises me in football. I really do wish them all the best in Europe, I hope they do well, but not as well as St Mirren in the league.

“It came to an end not the way I liked it to, but I had a great time at Motherwell. All in all it was very successful and I loved every minute of it.”