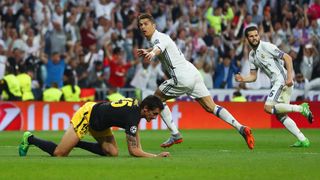 Cristiano Ronaldo continues to exceed expectations with his Real Madrid heroics, according to team-mate Marco Asensio.

Ronaldo struck a hat-trick in the first leg of his side's Champions League semi-final against Atletico, guiding Madrid to a 3-0 win at the Santiago Bernabeu on Tuesday.

The Portuguese forward has now scored eight goals in his past three European outings, helping champions Madrid put a foot in the final.

Asensio, who came off the bench in the first leg, said Ronaldo continued to meet the lofty challenges set for him.

"Cristiano just keeps getting better and he always exceeds any expectations people put on him," he said.

"We have to thank the fans because whenever we have a crucial game, they're there driving us on."

Ronaldo headed in a 10th-minute opener before two second-half goals put Madrid in complete control of the tie.

Asensio felt the 3-0 win was just what Zinedine Zidane's team deserved for their display.

"We produced a very complete performance. The result was a fair reflection of what happened out on the pitch," he said.

"We're very happy with the result, which puts us in a great position ahead of the return leg, but we have to treat the game at the Calderon very seriously.

"We knew how important it was not to concede a goal at home. We managed to keep a clean sheet and score three goals."