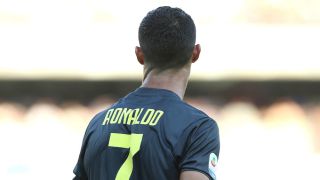 Ronaldo completed a blockbusting €112million move to the Serie A champions last month, with many of his record-breaking deeds for Manchester United, Real Madrid and Portugal having taken place with "7" on his back.

The five-time Ballon d'Or winner famously has his own "CR7" brand and Colombia winger Cuadrado was only too happy to accommodate his new team-mate.

"I spoke with the club in the beginning and I spoke with Cuadrado because he was number seven.

"He said, 'For me, it's not a problem. It will be a pleasure for me to give you my number seven, my shirt'.

"I am surprised, in a good way because the club helped me and Cuadrado accepted very well.

"I am really glad to continue with my number seven."

Cuadrado, sporting his new number 16, featured alongside Ronaldo as Massimiliano Allegri's Juve got their quest for an eighth consecutive Scudetto up and running with a dramatic 3-2 win at Chievo last weekend.