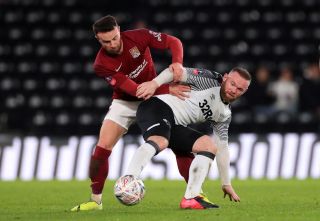 Andre Wisdom, Duane Holmes and Jack Marriott also netted for the hosts while Nicky Adams’ goal and Sam Hoskins’ penalty kept the Cobblers in the game.

Cocu said: “He’s going to face the club where he had a wonderful career so of course it is special.

“He comes back from the States, joins us and now plays his old club where he had a great career. We have to wait for a month but I’m sure he’ll be ready.

“It will be a beautiful game not just for Wayne, but everyone at the club. It’s a great game to look forward to and we will also try to win it, against a strong opponent.

“Nothing is impossible in football. If you play them six times you lose five times but maybe one time you can win – we have to make sure that time is in March.

“I’m pleased for the team, the players and the club.”

Wisdom’s first goal since 2012 – when he scored on his Liverpool debut – and Holmes’ second of the season put the Rams 2-0 ahead by half-time.

Rooney’s penalty with 13 minutes left put the tie beyond Northampton, while Hoskins’ spot-kick did at least pull another goal back.

The Cobblers are fifth in Sky Bet League Two and were the lowest ranked side left in the competition.

Defeat was their first since Boxing Day but manager Keith Curle felt they gave Derby too much respect.

He said: “In the first half I didn’t think we turned it enough into a cup tie. We needed to upset their rhythm.

“They pass and move very well and it can make it difficult. When you are playing against good players you need to slow them down a bit.

“Overall, we came and we competed. My players will do that because that’s the demands I put on them. The effort and commitment, when someone puts the shirt on, that’s there.”