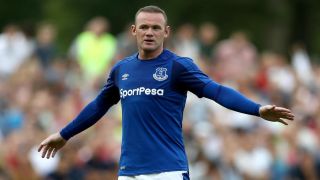 Wayne Rooney has been described as "extraordinary" by former team-mate Louis Saha, who believes the Everton forward will continue to excel at the highest level for some time to come.

Rooney, 31, has made a superb start to his return to boyhood club Everton, scoring twice in the opening three Premier League matches of the season.

Deemed surplus to requirements at Manchester United, many questioned Everton's decision to re-sign a player they sold in 2004.

However, England and United's all-time leading scorer has reinvigorated himself at Goodison Park – bringing up his 200th Premier League goal against Manchester City before the international break – and Saha heaped praise on the former Three Lions and Red Devils captain.

"Rooney is an immense player with the biggest heart I've ever seen," Saha – who played alongside Rooney at Old Trafford and is the founder of Axis Stars, which is a social network for past and present players and coaches – said in an interview with Omnisport.

"Wherever he goes, he will be decisive because he's got a brain that can replicate the extraordinary. Not many can.

"He's done it and will until the end of his career, and that is not soon in my eyes."

Rooney was one of many fresh faces brought to Goodison Park by manager Ronald Koeman in the off-season.

Everton splashed the cash on Gylfi Sigurdsson, Davy Klaassen, Jordan Pickford, Michael Keane and Sandro Ramirez in their bid for a first piece of silverware since winning the FA Cup and Community Shield in 1995.

"Everton just need to win a trophy again as they have been the team consistently trying to reach a new level without the funds like Tottenham or Chelsea," Saha, whose four-year spell at Everton ended in 2012, continued.