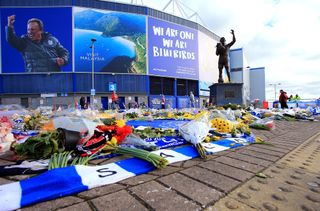 A final report by the Air Accidents Investigation Branch (AAIB) concluded that the single-engine Piper Malibu aircraft suffered an in-flight break up while being flown too fast for its design limits.

It added that pilot David Ibbotson, 59, was probably affected by carbon monoxide poisoning.

Investigators found that a contributory factor in the crash was Mr Ibbotson having no training in night flying and a lack of recent practice in relying only on cockpit instruments to control a plane.

Mr Ibbotson flew him from Cardiff to Nantes so he could say goodbye to his former team-mates later that day, before conducting the fatal return flight two days later when the plane plunged into the Channel.

Sala’s body was recovered but Mr Ibbotson has not been found.

Neither Mr Ibbotson nor the plane was licensed for the flight to operate commercially but evidence showed he was to be paid a fee, the AAIB said.

Former football agent Willie McKay has said he paid for the fatal flight but did not choose the pilot or the plane.

He has explained he was helping his son Mark, who was acting for Nantes, to complete the transfer.

Alison Campbell, senior inspector for operations, said it was a dark night with “little or no” visible horizon.

“There was poor weather in the area, and from his radio calls, it was clear the pilot needed to manoeuvre to avoid it,” she explained.

Following a descent of thousands of feet in a matter of seconds, the pilot attempted an “abrupt nose-up” manoeuvre.

This was conducted at a speed far in excess of the design limits of the plane, causing it to break-up.

Investigators concluded that the aircraft entered the Channel upside down, and the impact was “not survivable”.

The AAIB also revealed that the pilot informed a number of individuals about four potential problems with the aircraft that had occurred during the outbound flight from Cardiff.

This included a “bang”, although its cause is unknown and it could not be determined if it was a factor in the crash.