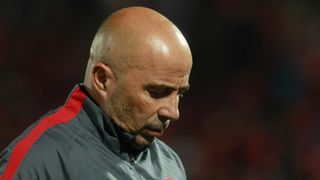 Jorge Sampaoli says he does not want to continue as coach of Chile, claiming he is being "held like a hostage" by the Football Federation of Chile (ANFP).

Sampaoli led hosts Chile to their first major honour at the 2015 Copa America and was nominated for the FIFA Coach of the Year award, while he has also been linked with Premier League champions Chelsea.

But the Argentinian has become increasingly unsettled following the resignation of former Football Federation of Chile (ANFP) president Sergio Jadue in November amid a corruption investigation.

Newly-elected president Arturo Salah revealed on Friday he intends to retain the 55-year-old's services until the end of his contract, which is due to run until the World Cup in 2018, despite acknowledging the coach had tried to negotiate an exit.

Sampaoli has said his request to leave was due to ill-treatment during the investigation, which he feels has made his position untenable.

"In this environment I would not want to work or live in the country. I never imagined in such little time the image of an idol who gave a lot to Chilean football could be destroyed," Sampaoli said on Radio Agricultura.

"I am frankly disappointed and in these conditions I cannot keep leading the team when my mind is elsewhere.

"I honestly thought Arturo Salah would understand and let me be free. I was surprised by his position to have me like a hostage, against my will. The scenario of recent months is sufficient reason for me to be released.

"I was very excited to continue and had very interesting future projects that could have been extended, but this ill-treatment is unacceptable.

"My honour and my personal dignity were affected by linking to me all acts of corruption that happened with the previous directors. They say I used those moments to bring economic benefits. That is unbelievable and unacceptable.

"I was shown as a character only worried about money. I don't have money like [former Chile coach Marcelo] Bielsa or [his assistant Eduardo] Berizzo.

"Five years ago I used to earn US$3,000. Don't you think I have the right to try to save money by depositing my salary in countries that protect legitimate income?"