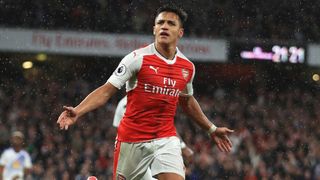 Arsenal star Alexis Sanchez needs time and space to decide his future, according to captain Per Mertesacker.

Sanchez, 28, is into the final year of his contract and is linked with a move away from the Emirates Stadium.

The Chile international gave his clearest hint yet that he would like to leave, saying on Saturday he wanted to play in the Champions League.

Mertesacker said Sanchez needed to be left alone to make a decision on his future.

"I have not spoken to him. He needs a break now. He needs to relax. He has done a lot for us," the defender said, via the Daily Mail.

"He played almost every game last season and then the Confederations Cup. You need to leave him alone to make up his mind about what he wants to do.

"He has one more year here and then he makes his mind up. It's his decision."

But Mertesacker believes the star forward will stay at Arsenal, saying: "I am very confident.

"It's his decision. If he feels good, comfortable, he can play with freedom. He has his qualities. You cannot find those everywhere."