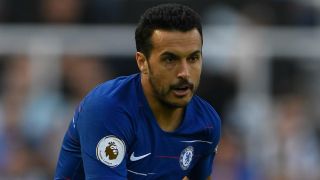 Maurizio Sarri is thrilled Pedro has agreed a new Chelsea contract as the head coach believes it is key for the club to keep top players.

Eden Hazard and Thibaut Courtois have both been linked with moves away from Stamford Bridge after helping Belgium to reach the World Cup semi-finals.

But Pedro agreed a one-year extension on Friday that will ensure he is committed to Chelsea through to the end of the 2019-20 Premier League season.

Speaking to reporters ahead of Sunday's Community Shield against Manchester City, Sarri hailed Pedro's attacking gifts with the versatile forward having scored twice in pre-season for Chelsea.

"I'm very happy about this," Sarri told reporters. "Pedro is very important for us.

"He is a technical player. Very usable for me. And I think I'm really happy about the new contract.

"Pedro is a top player. It's very important for us to keep the top players."

Sarri on Pep Guardiola: 'We went together to see Arrigo Sacchi. He is a friend and I think he is the best coach in the world now.' August 3, 2018

Although both Chelsea and City are likely to be without some of their World Cup stars, Sarri said Cesc Fabregas could be available despite a knee injury sustained against former club Arsenal in the International Champions Cup.

"Not a serious injury," Sarri said. "I don't know if he will be able to play on Sunday. But it is nothing serious.

"The players are not at a top level, a bit tired maybe, a lot of training, travel and matches. Not at the top level now but we have to try to have a good performance and a good result.

"I am looking forward to playing at Wembley because it is my first time. The match will be very difficult for us. I want to win. Because it is very important to have a trophy immediately.

"But at this moment of the season it is very important the performance. We have to improve of course. So I hope to see from my team another step forward."