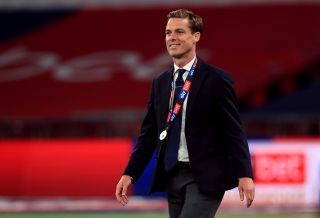 Fulham manager Scott Parker insists the final say on transfers is his and suggested the club could yet do more deals before the window closes on October 5.

The west London club have already made five additions to their squad this transfer window, including Anthony Knockaert and Harrison Reed who had been on loan at Craven Cottage last season.

Kenny Tete and Ola Aina are also expected to join the club in the coming days, although Parker insisted the deals were not official yet.

“This is the world we live in, part and parcel of football you want to progress – if you can bring people in that you think can make you better, then you will do that.”

When Fulham were last promoted to the Premier League in 2018, they spent more than £100million in the summer transfer window, including the signings of Jean Michael Seri, Andre Schurrle and Alfie Mawson.

The club were relegated on April 2 the following year and Parker was named caretaker boss after the sacking of Claudio Ranieri in February 2019, but the ex-England international believes this year will be different.

When asked who makes the final decision in terms of transfers, Parker said: “Do I have the final say on what players come int the football club? 100 percent.”

He added: “Are we going to spend 100 million this time? No. But I don’t think that’s the issue.

“If they improve us, if they enhance us and make us better then that’s for sure who we want. Wholesale change? No of course not but at the same time there’s a real balancing act of improving as a team and evolving as a football club and getting better and also not losing sight, not losing people who understand and can drive a culture and an environment as needed.”