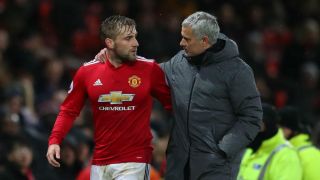 Manchester United left-back Luke Shaw is feeling better mentally and physically than at any time since his horror leg break in 2015.

Shaw was a £30million signing from Southampton in June 2014 and had hit a rich vein of form early in the 2015-16 season under Louis van Gaal, only to suffer a sickening double fracture during a 2-1 Champions League defeat at PSV Eindhoven.

Since returning to full fitness, life has not always been easy for the 22-year-old under Van Gaal's successor Jose Mourinho, who has publicly criticised the England international and left him out of the side for extended periods, with further injury setbacks an added complication.

But Shaw was named in United's starting XI for the fourth consecutive Premier League game against Stoke City on Monday – his longest run in the side since the start of last season – and he believes being back in prime condition has been a factor in prospering of late.

"I've always, especially recently, felt really confident, and I knew I was in a good moment fitness-wise with the work I'd been doing. And I knew when my chance would come I'd be ready," he told United Review.

Tough game but we got the 3 points! Thanks everyone for the support December 13, 2017

"A bad injury like I had always stays with you a little bit afterwards but it's in the past and I feel really good and really fit, and my leg feels perfect.

"Body-wise and fitness-wise I probably feel the best I've ever felt.

"Mentally I feel very strong as well and I’m enjoying my football, and it's now about pushing on and helping the team."