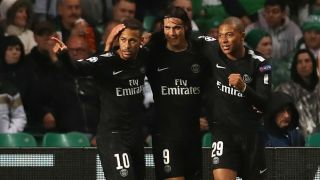 There are rumours of discontent within the PSG dressing room after Neymar, a world-record €222million signing from Barcelona last month, argued with Cavani over who would take a penalty in the 2-0 Ligue 1 win over Lyon.

Head coach Unai Emery says he has spoken to them about the issue amid reports Cavani was offered a €1m bonus by the club hierarchy to hand over responsibilities from the spot, after he missed the contentious spot-kick against OL.

But Sissoko, who won the league with PSG in 2012-13 during a two-year spell, does not believe the players are that concerned.

"It's just the journalists that make this happen," he told Omnisport. "But in the end, two big players, the problem of penalties is not important to them."

Neymar's move was completed in acrimonious fashion, with Barca launching legal action against the 25-year-old over an alleged breach of contract and Neymar suing his former employers for refusing to grant a bonus payment stipulated in his old deal.

Sissoko says his decision should be respected and believes Neymar will be happy at Parc des Princes.

"I think he moved to Paris Saint-Germain because you know, PSG want to win something," said the former Liverpool man. "And I think he has a lot of friends there, Brazilian people. He knows why he made the decision and we need to respect his decision.

"This is football. Sometimes you move because you have a lot of things to think about. Now he's in PSG we'll see he's very happy to be there."

PSG face Bayern Munich on Wednesday in a match that should prove an early test of their credentials as true Champions League contenders.

Sissoko believes PSG look strong in the wake of their massive investment in the squad but expects them to face tough competition.

"You know this pressure is very strong to buy top, top players," he said. "It's not the same as before. The Qataris gave everything to build PSG.

"You can buy a lot of players with big talent, but at the time the other team also build their teams. So, we will see what will happen in the Champions League but I think PSG are very strong.

"Other teams like Barcelona, Bayern Munich, they are strong also, so we will see."