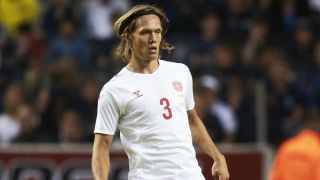 Southampton have completed the signing of Denmark international Jannik Vestergaard from Borussia Monchengladbach for a reported £18million.

The towering 6ft 6in defender has signed a four-year deal at St Mary's.

West Ham were believed to be among a host of Premier League suitors for the 25-year-old, who was linked with Arsenal in January.

He arrives in England with a strong reputation forged across eight seasons in the Bundesliga with Hoffenheim, Werder Bremen and latterly Monchengladbach.

Saints boss Mark Hughes praised Vestergaard's "character and leadership qualities" and the aerial presence he brings to both boxes.

"We have had to fight off a lot of competition to bring Jannik here, and we are delighted he has chosen Southampton as the right place to take the next step in his career," Hughes said.

"Although we were aware of the level of interest in Jannik, he made it clear very quickly that the quality of the club and the ambitions we have here meant this was his number one option."

An unused member of Denmark's World Cup squad, Vestergaard will compete with the likes of Maya Yoshida, Jack Stephens and Wesley Hoedt for a starting position.