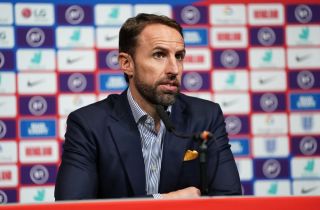 Gareth Southgate has warned James Maddison and other members of his England squad that he cannot promise them game time as he faces the “conundrum” of selecting from a group of in-form players.

The Three Lions boss named his squad for the forthcoming Euro 2020 qualifiers away to the Czech Republic and Bulgaria on Thursday, insisting the set-up is a meritocracy as the likes of Dele Alli, Jesse Lingard and Kyle Walker missed out.

In a 25-man group containing just 11 of the players who made up Southgate’s World Cup squad last summer, it is clear a new generation are starting to emerge.

While the likes of Jadon Sancho, Trent Alexander-Arnold and Mason Mount have already made their mark – Maddison is still waiting to make his senior debut having already previously been involved in two other squads.

The Leicester playmaker has been in fine form for his club but, along with new call-up Fikayo Tomori and Aston Villa’s Tyrone Mings, is yet to collect a cap.

“I can’t guarantee people football,” Southgate replied when asked if he had spoken to Maddison to explain why he has yet to make it onto the pitch in any of the four games he has been available for.

“He only has to see the players that have been left out to recognise just to get in the squad is an achievement, and I don’t handle him any differently to any of the others, really.

“He wants to talk football which is great. He wants to know what areas of his game that we like and that we think he can improve.

“He seems to take all of that on board really well, so he’s playing very well, but so is Mount, so is Sancho and so are all of the others – that’s the conundrum.”

While Southgate has consistently shown faith in England’s younger stars, insisting it would be unfair to drop them as soon as more established names are fit and available, he still wants them to earn a place in his side as he starts building towards Euro 2020.

“It’s a strange job because we won two games last time, we scored nine goals, and I was asked about creative players who didn’t get on the pitch but we’ve got really good competition,” he added.

“The players have to understand that, I can’t promise and I can’t say that you’ll definitely play.

“There are times we’re in camps where I might say to the players, “you’re not playing tonight, I’m starting you on Tuesday”, but I’ve never promised things ahead of a camp.

“So, the competition is there. We’re giving them the opportunity to come and impress and it’s up to them; they select the team, really.