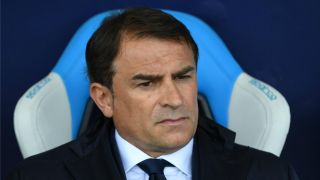 SPAL secured a dramatic promotion to Serie A after 49 years out of the Italian top-flight despite falling to a 2-1 defeat at Ternana on Saturday.

Forward Mirco Antenucci had given SPAL an early lead with his 18th league goal of the season, only for Ternana to hit back thanks to a double from Stefano Pettinari before half-time.

With promotion rivals Frosinone drawing their game going into the closing stages it looked as though SPAL's promotion party would be delayed, until Fabio Ceravolo struck deep in injury-time to give Benevento a 2-1 win in that match.

SPAL played in the third-tier Lega Pro last season and have now secured back-to-back promotions to reach Serie A under head coach Leonardo Semplici, with the club set to face off against giants including Juventus, AC Milan and Inter next season.

With one game still to play in Serie B, Verona and Frosinone are competing for the second automatic promotion spot to Serie A, with Verona two points clear after drawing 1-1 with Carpi.

Verona travel to Cesena in the final round of Serie B fixtures knowing they need to match the result of Frosinone, who host Pro Vercelli.