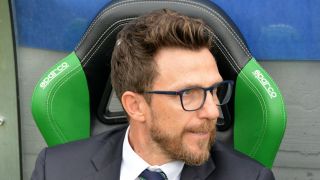 Luciano Spalletti believes Sassuolo coach Eusebio Di Francesco should be appointed as his replacement at Roma.

Spalletti's departure from Roma was confirmed on Tuesday, with the Italian having been strongly linked with the vacancy at Inter.

The 58-year-old's second spell in charge ended with Roma setting a new club record for points won in a Serie A season, although they still finished four points behind champions Juventus.

And Spalletti suggested Sassuolo's Di Francesco or Vincenzo Montella - who signed a new two-year deal at AC Milan on Tuesday - should succeed him at the Stadio Olimpico, but would not be drawn on his own links to Inter.

"A message for Di Francesco? But has Di Francesco been announced? Is this a trap?" Spalletti told reporters.

"I hope one of Di Francesco or Montella is the next Roma coach, because they know the environment and they have the human qualities you need, as well as the coaching skills.

"As for myself, I am free to talk to who I want. I'll start tomorrow and if anyone wants to call me, then I'll listen to them."

Di Francesco is a former Roma player who was at the club when they last won the Serie A title in 2001, while he has led Sassuolo to promotion from Serie B and qualified for the Europa League in his five years in charge.

: "I'd like to thank all the staff, the players and the 'invisible' team working behind us that enabled us to do our jobs well."May 30, 2017

Spalletti insisted he leaves Roma in a good position, with the club having appointed Monchi as their new sporting director and plans in place to build a new stadium.

"I never cut my ties with Roma completely, even when I was in Russia," the former Zenit coach added. "I always kept tabs on the team's results and how they were doing. I think we can say we worked well.

"In this game it comes down to what happens at certain moments and the decisive results, but the main thing is that I leave a very strong Roma side – a team with some great players.

"[President Jim] Pallotta comes from a different sports background and he's shown that he wants to invest and achieve great things. He wants to build Stadio della Roma - and people cast doubt over whether he's doing it for personal interest? As I've said before, let's build this stadium. It would make everything easier for Roma.

"Italian football as a whole would benefit but it would be especially beneficial for those who love this club. It's key to so many things: greater revenue, more work for more people and more enjoyment for the fans going to the stadium."