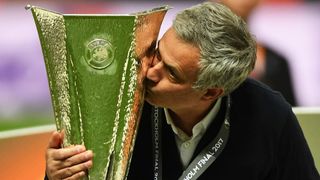 Manchester United boss Jose Mourinho conceded he felt he was the worst manager in the world during a gruelling campaign, which was capped off by Europa League victory and Champions League qualification.

Following a sixth-place finish in the Premier League amid crippling injuries to stars Zlatan Ibrahimovic, Marcos Rojo and Luke Shaw, everything hinged on the Europa League result at Friends Arena, and Paul Pogba and Henrikh Mkhitaryan ensured United ended the season with a third trophy, having claimed silverware in the Community Shield and EFL Cup.

As Mourinho celebrated a fourth European title from four finals, the Portuguese tactician revealed doubts about himself.

"We have the honour of going to the European Super Cup to play the Champions League winner. It was a really good victory, victory of pragmatism, victory of humble people, who respect opponents, try to explore opponents' weaknesses. A win for a fantastic group, but a win for pragmatism. Not poets, just humble people."

Mourinho, who replaced Louis van Gaal in the off-season following his exit from Chelsea in 2015-16, continued: "For me it's the most important trophy of my career, because it's my last.

"That's the way I look at things. Of course the Champions League is bigger than the Europa League but that's the last trophy and the last trophy is one where feelings are under the skin, obviously a fantastic feeling.

"For the team it means everything, means a third trophy, go back to Champions League, means win a European trophy, means play European Super Cup in Macedonia in August, means for the club the last piece of the puzzle.

"It's not like Ajax and some other clubs with every trophy in the world of football. For me it means a lot and for the boys and for the supporters too I believe."

United's triumph was significant in more ways than one following Monday's terror attack in Manchester, which claimed 22 lives and injured more than 100 people.

United in grief after the incident at Manchester Arena, Mourinho said: "If we could, we would change obviously the people's lives for this cup immediately, we wouldn't think twice.

"But this cup makes the city of Manchester a little bit happier? Maybe. But we just come to do our job, we came without the happiness we bring with us because when you come for these matches you come happy and proud. We didn't. The boys were fantastic, they blocked, they put a wall in front of their eyes and stayed isolated from everything, focused on a football match we played really well and the boys deserve this moment."