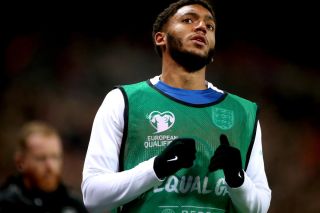 Raheem Sterling has criticised England fans who booed Joe Gomez during the 7-0 rout of Montenegro at Wembley.

Forward Sterling missed the victory which secured the Three Lions’ passage to Euro 2020 after his skirmish with Gomez at St George’s Park on Monday.

Liverpool defender Gomez was jeered when he came on in the second half, leaving Manchester City star Sterling unhappy in the stands.

especially after a difficult week for him to be booed when he came on tonight was wrong.— Raheem Sterling (@sterling7) November 14, 2019

Sterling tweeted after the match: “To all the England fans, I wanted to leave things as it was but tonight I have to speak again.

“It was hard for me to see my team-mate get booed for something that was my fault. Joe hasn’t done anything wrong and for me to see someone who keeps his head down and work hard…

“Especially after a difficult week for him to be booed when he came on tonight was wrong. I’ve taken full responsibility and accepted the consequence. I felt as though I had to say this, get home safe every one.”