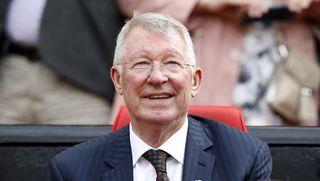 Sir Alex Ferguson is still giving advice to his former players as they follow in his managerial footsteps.

Newcastle head coach Steve Bruce has revealed the Scot, under whom he enjoyed such success as a player at Manchester United, is only a phone call away when problems arise.

Two of Ferguson’s old boys will go head-to-head when Bruce’s Newcastle welcome Ole Gunnar Solskjaer’s United to St James’ Park on Sunday with both in need of a win, and his influence could well be at play.

Asked if he had spoken to him recently, the Magpies boss said: “I’ve spoken to him a couple of times. I always ring him for a bit of advice now and again. I saw him on Monday night at Old Trafford.

“He has been terrific, and not just for me. For any other manager, if there is ever a time you need a bit of advice, he is always there to help you.”

Asked what Ferguson had said to him on Monday evening, Bruce replied with a smile: “You don’t want to know.”

Bruce was part of the United team which famously won 1-0 at St James’ in March 1996 courtesy of Eric Cantona’s goal as they reeled in Kevin Keegan’s Newcastle to deny them a first league title since 1927.

Ferguson won 13 Premier League titles as he built a series of teams which also dominated in Europe, although the club has found the going tougher since his retirement in 2013.

Bruce said: “When you think of the dominance that Man United had….for the last four or five years, even though they have had great managers, following someone like Sir Alex has been difficult for them all.

“It just shows you what a wonderful job he did. But I wish Ole all the best, I really do.”

Bruce read the riot act to his team after last weekend’s 5-0 horror show at Leicester, although he insisted he has never reached Ferguson’s famed “hairdryer” level.

Indeed, he admitted that even dressing room post-mortems are now less heated than in the past.

He added: “Football has changed. Back in our day, there would be a fight every other week in the dressing room, especially in that Manchester United dressing room. The manager didn’t have to do it.

“It doesn’t happen in these days. You have got to move with the times. Gone are those days when another player would get hold of you – and that would be frequent.”