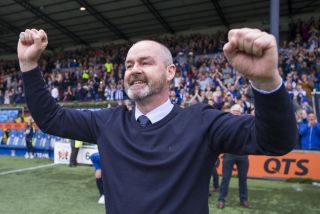 Steve Clarke has been appointed as the new Scotland manager.

The 55-year-old, who guided Kilmarnock to a third-placed finish in the Ladbrokes Premiership this season, replaces Alex McLeish, who stepped down from the role in April.

The Scottish Football Association said in a statement it was “delighted” to announce Clarke’s appointment.

“Steve joins from Kilmarnock on a three-year contract until the end of the FIFA World Cup 2022 qualifying campaign and was appointed after an extensive recruitment process undertaken by the Scottish FA chief executive Ian Maxwell and endorsed by the board,” the statement added.

Clarke won both the PFA Scotland and Scottish Football Writers’ Association Manager of the Year Awards for steering Kilmarnock to their highest-placed finish since 1966.

“It is an honour to be appointed Scotland national head coach and I will undertake those responsibilities with pride and commitment,” Clarke said.

Thanks for everything boss— Kilmarnock FC (@KilmarnockFC) May 20, 2019

“I firmly believe we have a talented group of players who can achieve success on the international stage. I look forward to working with them and helping them to fulfil those ambitions.”