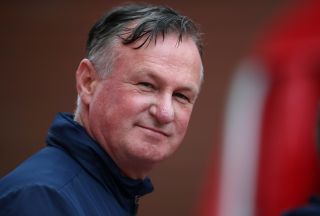 Michael O’Neill hailed the growing confidence of goalkeeper Adam Davies after Stoke beat Blackpool 5-4 on penalties in the first round of the Carabao Cup.

Davies saved spot-kicks from Oliver Sarkic and Keshi Anderson to take the shoot-out into sudden death after the game had ended goalless in 90 minutes.

Bruno Martins Indi and James Husband made no mistake to make it 4-4 before Tashan Oakley-Boothe scored with the aid of the post.

But Ollie Turton dragged his penalty wide to give Stoke their seventh penalty shoot-out win in the competition’s history.

Lee Gregory should have scored when he fired wide for the hosts after 22 minutes.

Marvin Ekpiteta came to the rescue in the 27th minute after a mix-up between Turton and Blackpool goalkeeper Chris Maxwell nearly led to an own goal, while CJ Hamilton headed over from Sullay Kaikai’s cross.

Bruno Martins Indi cleared off his own line before blocking Hamilton’s follow-up header under his own crossbar as the visitors impressed.

Michael Nottingham did brilliantly to stop Benik Afobe in his tracks on the hour mark after the Stoke man had a one-on-one at goal.

Husband produced a last-ditch tackle after Sam Clucas got clean through in the 71st minute as the game drifted to penalties.

After the game O’Neill described Davies’ display as a “real plus point” for his side.

“I was pleased with his performance,” he said. “I thought he played well and showed what a capable keeper he is.

“With every game his confidence is growing, he was a real plus point. Clean sheets are important and we know we need to be solid at the back.

“We were very poor and wasteful at times, but it is important that we went through so we can have the opportunity for more competitive games, which we need.

“We want to stay in the cup to get minutes in. There were a lot of things that were infuriating today.

“A lot of the quality was poor and the levels of some of the players was disappointing. We need to improve and get minutes under our belt.

Blackpool head coach Neil Critchley said his side could take plenty of positives from the defeat.

“We feel a bit unlucky not to win it. Over 90 minutes we certainly matched them and gave as good as we got.

“We went toe-to-toe with them and had the better of the first half certainly. The second half they had a spell when they were on top, but we managed it well and finished the game strongly.

“We are slightly disappointed not to have won the game in 90 minutes.

“I felt we were ready for this game, physically, mentally and tactically, I sensed we were ready as a group and the performance backed it up today.

“We will only get better and stronger from there and the belief will grow.

“There are lots of positives, but when you get beat on penalties it doesn’t feel like it at this moment in time.

“We matched them so we are really encouraged by our performance – but I would rather have won and be in the next round.”