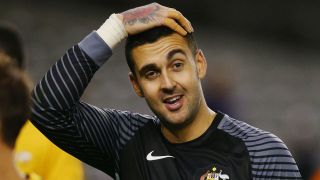 Stoke City have announced the signing of experienced goalkeeper Adam Federici on a two-year deal from Bournemouth.

The Australian is the Potters' third signing of the off-season after Oghenekaro Etebo and Benik Afobe’s arrival at the club.

Federici joins after Manchester United completed the signing of Stoke’s second choice goalkeeper Lee Grant, and the former Socceroos stopper could become the club’s number one, depending on how the future of Jack Butland pans out.

"Adam [Federici] is a player with bags of experience, with Reading notably and Bournemouth as well," manager Gary Rowett told the club’s website.

"He’s an excellent professional, great trainer and a very good goalkeeper who we see as one of three senior keepers who need to be pushing each other. I’m really pleased that we have been able to bring him into the club."

Federici, 33, made 17 appearances in three years for Bournemouth and has been capped 16 times by Australia.