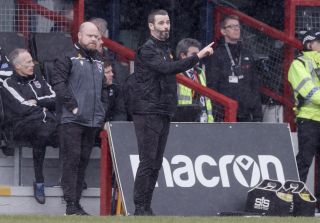 Stuart Kettlewell hopes Ross County and Hamilton demonstrate that they are not relegation candidates when they meet in Lanarkshire on Saturday.

The Staggies boss noted that both sides have been widely tipped to struggle to remain in the Premiership this season.

Accies, who sat in 11th place last season when it was cut short by the coronavirus crisis, were hammered 5-1 by champions Celtic at Parkhead on Sunday.

County, who finished two points better off in 10th, opened their campaign with a 1-0 home win over Motherwell on Monday night.

Looking forward to the trip to Lanarkshire, Kettlewell said: “We probably feel a similar sense of being written off at times, as they have been over the years.

“From that aspect, it is two teams, from what I have seen a week or so ago, that were tipped for relegation.

“So we will both feel we have a point to prove and we will hopefully try to get some people eating their words but you use all these things as motivation.

“Probably most folk will look at this game and see it as one that you maybe don’t want to watch or think that it is going to be the greatest spectacle of football.

“But I hope that Hamilton do what they did on Sunday – for I thought they had a real go at Celtic for spells and the scoreline doesn’t reflect some of their play – and we do what we did on Monday and it creates a good spectacle for the game.

“You take all that in your stride but what you have to remember is that you are dealing with a group of professionals who have that winning mentality, whether it be in training or three o’clock on a Saturday, you always have a major appetite to win a game of football and win your individual battle.

“Ultimately that is the kind of hunger I am looking for from my group of players.”