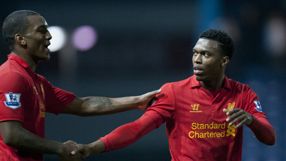 Swansea City and Arsenal had earlier drawn 2-2 in a dramatic match at the Liberty Stadium that featured a lightning strike from substitute Michu and a dramatic three-goal flurry in the final 10 minutes.

Sturridge, signed from European champions Chelsea, took just seven minutes to open his account on a rutted Mansfield pitch that looked more like a mudfield in places.

Suarez, who replaced the England striker in the 55th minute, made it 2-0 after just four minutes on the pitch but the goal triggered accusations of cheating after television replays showed the ball had hit his hand.

Liverpool manager Brendan Rodgers, however, played down the incident.

"There's no doubt it was handball," he told ESPN television of a goal that proved to be the winner. "Obviously what the referee and officials were looking at was that it wasn't deliberate, which it clearly wasn't."

Neutrals hoping for a magical upset, in a David and Goliath clash typical of the world's oldest knockout competition, were given hope when Matt Green pulled one back for the Stags in the 79th and Liverpool faltered.

The game ended with Liverpool under pressure, Green having a shot turned away in stoppage time and Exodus Geohaghon rattling the visitors with his immense throw-ins.

Swansea's big Spaniard Michu made an instant impact 58 minutes into the game against Arsenal when he netted 73 seconds after coming off the bench to chants of "he scores when he wants to" from a spirited Welsh crowd.

It was his third goal against Arsenal this season, after scoring twice at Emirates Stadium in the Premier League last month.

Arsenal, without any silverware since 2005 and determined not to let their best remaining chance of the season slip through their fingers after a slow-burning start, equalised through substitute Lukas Podolski in the 81st.

Kieran Gibbs then put the visitors 2-1 up with a volley two minutes later.

The Arsenal fans' elation was short-lived, however, with Danny Graham grabbing an equaliser from close range in the 87th in a frenetic final few minutes during which either side could have produced a winner.

Arsenal's Theo Walcott had the ball in the net but was ruled offside, while team-mate Laurent Koscielny fired over the bar on the rebound from a Michel Vorm save. A 51st-minute penalty claim by Arsenal also fell on deaf ears.

"A replay wasn't exactly what I was hoping for, especially with the two League Cup games against Chelsea in mind and the league games coming up," said Swansea manager Michael Laudrup. "It's a very tight schedule. But a replay is better than a defeat."

Arsenal manager Arsene Wenger said his side should have won and questioned referee Howard Webb's decision.

"It was a penalty. The referee didn't give it because he thought it wasn't deliberate, but Aaron [Ramsey] didn't trip himself. He was clipped by the Swansea player," he said.