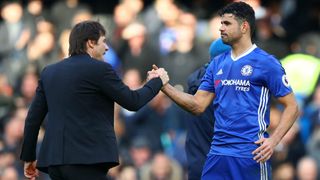 Diego Costa insists that he leaves Chelsea with "no bitterness" towards Antonio Conte despite reports of a fractious relationship with the Italian prompting a return to Atletico Madrid.

Chelsea and Atletico secured a deal, estimated to be worth up to €60million, on Thursday, with Costa set to undergo a medical and agree personal terms before finalising a reunion with Diego Simeone's side.

Conte informed Costa that he was not in his plans for the campaign in pre-season, with the pair reported to have fallen out in January over the Blues' refusal to sanction a move to China, but the striker was welcomed back for Chelsea's title run-in.

A pre-season move failed to materialise and Costa opted to remain in Brazil rather than return to training, but with a departure close, the 28-year-old insists he bears no ill will because "everything is cool".

Interviewed by Splash News in a Sao Paulo airport, Costa said: "Everybody knows how much I love the fans.

"There's nothing of the sort [anger] there. I'm not upset with anyone. I have no bitterness towards anyone. Everything is cool."

Costa is expected in Madrid to complete his move on Friday, but he will be unable to feature for the club until January.