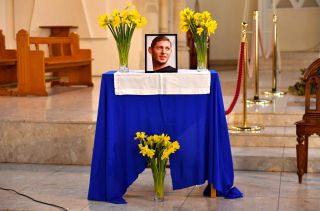 Cardiff management, players and supporters have paid tribute  to Emiliano Sala on the first anniversary of the striker’s death.

The Argentinian forward died on January 21, 2019 when the plane carrying him from Nantes in France to his new club Cardiff crashed in the English Channel near Guernsey.

Bluebirds manager Neil Harris, captain Sean Morrison and Sol Bamba were among those to attend a dedication service to Sala and Ibbotson at St David’s Cathedral in Cardiff city centre on Tuesday afternoon.

Supporters arrived at the Cardiff City Stadium throughout the morning to pay tribute to Sala.

Fans left flowers, banners and shirts in memory of Sala, who was unveiled as a Cardiff player two days before his death.

A floral tribute quoted Sala’s own words, saying: “I know the challenge is big but together we will make it.” The message added: “Forever in our hearts.”

An Argentinian flag was laid next to the Fred Keenor Statue, with the name ‘Sala’ written on it.

Cardiff expressed their sympathy to the friends and family of Sala on their official website.

“All of our thoughts are with the family and friends of Emiliano Sala and (pilot) David Ibbotson,” said a Cardiff club statement on behalf of the owner Vincent Tan and the board.

“The pain they have been through over the last 12 months must be indescribable.

“To mark the anniversary we are welcoming supporters to lay floral tributes at the Fred Keenor Statue throughout the day.”

Sala’s family will mark the anniversary of the striker’s death in “private, quiet contemplation of their loss”, their British lawyer has said.

Cardiff, who were in the Premier League at the time, and Nantes have since been in dispute over fee payments.

Cardiff decided not to hold an official vigil to mark the anniversary of Sala’s death, but said fans were welcome to lay tributes at the Fred Keenor statue during the day.

Nantes, for whom Sala scored 42 goals in 120 league games during three-and-a-half years at the club, will wear a special commemorative shirt at the Ligue 1 home game against Bordeaux on Sunday.