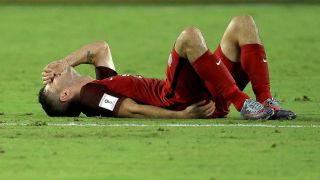 The United States failed to qualify for the World Cup after suffering a shock 2-1 loss to Trinidad and Tobago as rivals Panama and Honduras both won in CONCACAF.

Bidding to reach an eighth consecutive World Cup, USA were poised to advance to Russia 2018, having occupied the third and final automatic berth prior to kick-off on Tuesday.

However, defeat to lowly Trinidad and Tobago, coupled with victories for Panama and Honduras meant Bruce Arena's men dropped out of the North American qualifying spots altogether, down to fifth.

Borussia Dortmund sensation Christian Pulisic pulled a goal back early in the second half to give the Americans hope, after an Omar Gonzalez own goal and Alvin Jones' stunning long-range strike gave Trinidad and Tobago a 2-0 half-time lead.

But USA were unable to net the equaliser that would have guaranteed them at least an inter-confederation play-off berth against Australia as they missed the World Cup for the first time since 1986.

USA were unchanged for the clash in Trinidad and Tobago after their 4-0 rout of Panama last week, with teenage sensation Christian Pulisic, Jozy Altidore and Michael Bradley headlining the XI.

Without a win in nine matches – six of those successive qualifying defeats – lowly Trinidad and Tobago brought in Alvin Jones and Tristan Hodge for Kevon Villaroel and Kareem Moses.

Bruce Arena was critical of the conditions pre-match, even inviting teams from Europe to experience what it is like to play qualifiers in CONCACAF.

And while the pitch was not as sodden as Monday, the Americans failed to convince from the outset, conceding a shock own goal in the 17th minute.

A seemingly routine clearance for Gonzalez following Jones' cross ended badly after the USA defender fluffed his lines, the ball scooping over a scrambling Tim Howard.

The Americans pushed numbers forward but they never really troubled goalkeeper Adrian Foncette, though Paul Arriola's had a shot flash just wide of the post.

It got worse for USA approaching half-time when Jones doubled Trinidad and Tobago's lead in the 38th minute.

Jones tried his luck from more than 35 yards and beat former Everton keeper Howard with a stunning strike – the 23-year-old's first international goal.

Trinidad and Tobago almost made it 3-0 on the stroke of half-time after that man again, Jones, attempted another long-range effort, which bobbled in front of Howard and left the American struggling to keep the ball out.

The Americans were much improved in the second half as Pulisic reduced the deficit just two minutes after the restart.

Having scored against Panama in Orlando, the 19-year-old made it two goals in two games, albeit fortuitously, after his shot deflected off Daneil Cyrus and past Foncette.

The hosts almost restored their two-goal cushion moments later but Besler's block denied Levi Garcia, while Howard got down low to stop Shahdon Winchester in the 63rd minute.

Substitute Clint Dempsey's volley forced Foncette into a save with 21 minutes remaining as USA pushed forward for an equaliser.

USA almost salvaged a draw and a play-off spot but Foncette got down low to thwart Bobby Wood at the death.