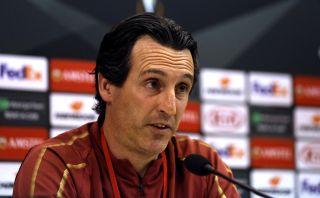 Unai Emery wants to win the Europa League to add something to the Arsenal trophy cabinet – not just to secure a return to the Champions League.

After being held to a 1-1 home draw by Brighton on Sunday, the Gunners’ hopes of finishing in the Premier League’s top four are all but over.

That means Emery must guide his team to Europa League glory if he is to end his first season at the helm by taking Arsenal back to the continent’s elite club competition.

Emery returns to former club Valencia on Thursday night for the second leg of their Europa League semi-final tie having won the first leg 3-1 at the Emirates Stadium last week.

The 47-year-old won three successive Europa League titles during his time at Sevilla and is keen for further success.

“I first competed for this title here at Valencia when it was still the UEFA Cup and was a lesser title than I think it is now,” he said.

“It has grown. It’s an important title for all those teams that are not in the Champions League – and for some who drop into it as a second chance, like Valencia this season.

“It’s a title they all want to win. Giving teams a Champions League place through the Europa League is a fair reward. I have seen that shift.

“The first time I won it with Sevilla, we didn’t get Champions League access; the second time, we did.

“The demands are high and everyone wants it, as a title, not just a way in (to the Champions League).

“At any club like Arsenal or Valencia, titles have to be the objectives. Arsenal only have two European titles in their history: the old Fairs Cup and the Cup Winners’ Cup, neither of which (still) exist, so I have a lot of ambition to win a title.”

Arsenal could still meet London rivals Chelsea in the Europa League final – but the Blues no longer need to win the tournament to play Champions League football next season after they secured a top-four finish in the Premier League at the weekend.

But Emery insists he is not feeling any additional pressure to deliver the Europa League title now it remains Arsenal’s only route into the tournament.

“We started with two possible routes to the Champions League, one through Premier League and second through Europa League, and we are speaking about Europa League like it’s one title,” he said.

“We want to play for the possibility to take the title, and secondly for the Champions League. We know it is going to be difficult and we are finished in the Premier League, no possibility, but we have a possibility in this competition.

“With big ambition, full motivation, strong mentality, I want to enjoy this game. Games like this, away, difficult team, for an important target is all positive for us.

“It (feeling pressure) is not a condition for me. I am positive. I am very demanding with myself and give my players this mentality we want to do something important. I am not feeling pressure like a negative.”