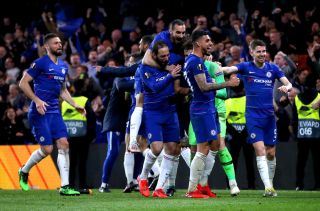 UEFA has defended the allocation of tickets for the Europa League final in Baku, claiming it would not be responsible to issue Chelsea and Arsenal fans more than 6,000 each.

Arrangements for both the Europa League showpiece on May 29 and the Champions League final between Liverpool and Tottenham have been heavily criticised.

Managers Jurgen Klopp and Mauricio Pochettino have joined forces with supporters’ clubs to condemn profiteering and ticket issues ahead of their match in Madrid on June 1.

Fans are dismayed at only 16,613 tickets being allotted to each club, while the rocketing cost of attending the match on account of increased air fares and hotel rates has also provoked anger.

Klopp became the first manager to voice his concern by objecting to the opportunism of the travel industry, while rounding on UEFA for their selection of Baku as the host city for the Europa League final.

“Of course, it is impossible to predict in advance which clubs will reach the final, while the venue has to be chosen around two years in advance.

“Taking into consideration the above and, most importantly, the geographical location and logistical capacity of airports in and around the host city, it was deemed that around 15,000 spectators would be able to travel from abroad.

“Offering more tickets to fans of the participating teams, without any guarantee that they would be able to arrange suitable travel to reach Baku, was therefore not a responsible option.

“Based on these circumstances, for this year’s UEFA Europa League final in Baku, 6,000 tickets have been made available to each of the finalists.

“UEFA remains in close contact with the finalists regarding the travel arrangements of their supporters and any other operational aspects with regards to the final.”

Pochettino experienced the rising prices first-hand when he attempted to book travel to Madrid in the hope that friends and family would be able to attend.

“We started to talk with the club today (Friday) to organise and see how it is going to work,” he said.

“Yesterday I was calling some hotels to try and book some rooms because I don’t know if my family and some people from Argentina are going to be there.

“I wanted to book and it was so difficult and the prices are so crazy. I am very surprised but it is normal that people take advantage of this type of opportunity to make benefit. It is going to be very, very difficult.”

The supporters’ clubs are dismayed by what they view as exploitation of fans’ determination to attend the Champions League showpiece.

“Our joy at reaching the final is tempered by the prices of travel, accommodation and tickets, and by the allocation of tickets,” their joint statement read.

“For many fans, this final is not a one-off event. It is the culmination of a journey. It is time to stop cashing in on fan loyalty.”

Arsenal Supporters’ Trust backed this stance. The Gunners have already insisted they are working with UEFA to gain a larger percentage of seats to add to the “disappointing ticket allocation”.

“This is an excellent statement by Spirit of Shankly. AST backs every word,” the Arsenal Supporters’ Trust said.

“We are working with them and all supporters’ groups to fight the disgraceful way that UEFA treats supporters. Not just at finals but at every stage. The 6pm kick-off just another example.”