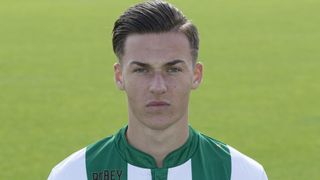 Groningen winger Ajdin Hrustic is the freshest face in the Socceroos' latest squad, with coach Ange Postecoglou having named a preliminary 30-man group for the busy month of June.

Hrustic, 20, is one of six uncapped players in the group announced on Monday and the only player to have never previously been selected for an Australian squad at any level.

The Melbourne-born winger, who is also reportedly being courted by Bosnia-Herzegovina – the country of his father's birth – has had a breakthrough season with Groningen.

Hrustic made his senior debut for the Eredivisie club at the start of April and finished the 2016-17 season with seven league appearances and one goal.

Australia will host Saudi Arabia in a World Cup qualifier in Adelaide on June 8 before facing Brazil in a friendly in Melbourne five days later, while the Socceroos also have the Confederations Cup in Russia next month with group games against Germany, Cameroon and Chile.

The 25-year-old has worn the green and gold at under-23 and under-20 level but has never been included in a Socceroos squad before, and his promotion means Australia will have two brothers in a squad for the first time since 2008 with Ryan McGowan also selected for the first time this year.

Jamie Maclaren, who signed with Darmstadt over the weekend, has earned a recall after sharing the A-League Golden Boot this season, as has goalkeeper Mark Birighitti.

Matt McKay, Chris Ikonomidis, Awer Mabil and Ryan Edwards have all been overlooked from those in Postecoglou's initial 30-man squad for March's qualifiers against Iraq and United Arab Emirates.

The squad will be trimmed to 23 players on May 31.

Postecoglou is looking forward to working with his players for an extended period of time, with the squad set to assemble in Adelaide on June 2.

"With most of the players' season coming to an end in the last week or two we will have a lot of players in early, which gives us a good opportunity to make sure we are ready for the Saudi Arabia game," he said in a statement.

"We'll be together for the best part of a month and previously we have been able to work towards some great outcomes when we have had an extended period together like the World Cup and Asian Cup."