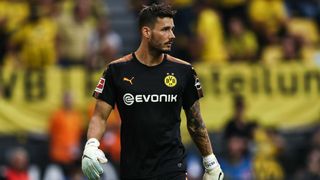 The Switzerland international was criticised for his performance in the 3-1 defeat at Wembley, during which he conceded shots at his near post from Son Heung-min and Harry Kane.

Burki accepts his performance was not up to standard but quoted comments attributed to Leicester City's Kasper Schmeichel, in all capital letters for added effect, as a means of hitting back at his critics.

The 26-year-old wrote on Instagram: "Yesterday was not our best day, was not my best day!

"But we'll keep our heads and here a few words for the people who think they are goalie experts:

"It's a myth. Something I have never understood. One day someone just came up with it and said a goalkeeper should never be beaten at their near post.

The result leaves Dortmund third in the group after the first round of matches, three points behind Spurs and Real Madrid, who beat APOEL 3-0.