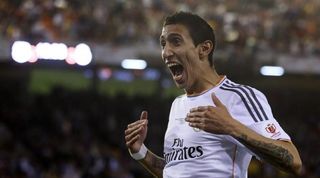 Di Maria has put pen to paper on a five-year contract with United after the clubs agreed a fee just under £10m more than Chelsea paid Liverpool for Fernando Torres to set the previous UK benchmark in January 2011.

The midfielder said: "I am absolutely delighted to be joining Manchester United. I have thoroughly enjoyed my time in Spain and there were a lot of clubs interested in me, but United is the only club that I would have left Real Madrid for.

"Louis van Gaal is a fantastic coach with a proven track record of success and I am impressed by the vision and determination everyone has to get this club back to the top – where it belongs. I now just cannot wait to get started."

United had been consistently linked with a move for Argentina midfielder Di Maria throughout the transfer window, with the former Benfica man having slipped down the pecking order at the Santiago Bernabeu following the close-season arrivals of James Rodriguez and Toni Kroos.

The 26-year-old becomes the Premier League club's fourth new recruit of the transfer window after the purchases of Luke Shaw, Ander Herrera and Marcos Rojo.

New manager Louis van Gaal is said to be keen on making further signings before next Monday's deadline, with Daley Blind and Nigel de Jong also reported to be on his shopping list.

Di Maria, who played a key role in helping Argentina reach this year's World Cup final, scored 36 goals in 190 appearances for Real after joining from Benfica in June 2010.

Much speculation has raged over exactly where Di Maria will fit into the 3-4-1-2 system utilised by United so far this season.

While not revealing any details on how the Argentinian will fit into his plans, Van Gaal expressed delight at the capture.

The Dutchman added: "Angel is a world-class midfielder but most importantly he is a team player. There is no doubting his immense natural talent.

"He is a tremendously fast and incisive left-footed player who puts fear into the most accomplished defence. His dribbling skills and his ability to take on and beat opponents are a joy to watch. He is an excellent addition to the team."