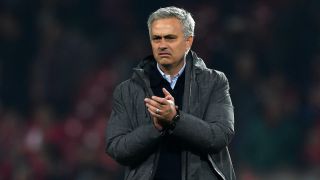 The Argentine defender, along with Eric Bailly, was then dismissed a minute later as the two sets of players clashed in the middle of the pitch.

And John Guidetti failed to finish United off with an open goal at his mercy with the last kick of the game and Mourinho accepted that his side were made to suffer for not capitalising on their superiority in the first leg.

"We were the best team in the first leg but we never kill [the game off]," he told BT Sport. "We never score goals related to the chances we have. It was an open game at home, all the pressure on our side.

"They were completely free of responsibility and gave us a very hard match. We suffered until the end and it was open until the last second. But the boys gave everything they had. I'm really pleased for them.

"Now, after 14 matches, we are in the final. If we win the Europa League I am more than happy. It would be amazing."

Bailly's sending off will leave a sour taste, however, with the Ivorian now set to miss the final in Stockholm on May 24, as he raised his hand to Guidetti's face.

Mourinho thinks the 23-year-old Ivorian might have been naive to get involved, particularly with Roncaglia around.

"I didn't see the red card incident but Eric Bailly was phenomenal," he said. "The game was emotional for everyone. Some kept control better than others.

"Facundo Roncaglia is not new in these situations, Bailly was probably naive. We now lose a very important player for the final, and we don't have many."