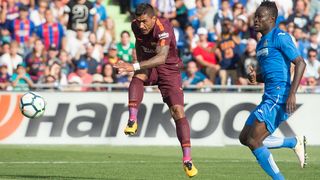 Ernesto Valverde praised the power of new signing Paulinho after his late winner gave Barcelona a 2-1 LaLiga victory away to Getafe.

Two of Valverde's substitutes, Denis Suarez and Paulinho, struck after the break as Barca came from behind, the Brazil international's winner coming with only six minutes remaining.

That came after a dreadful first half that saw the visitors lose Ousmane Dembele to what they fear will be a torn hamstring– Gerard Deulofeu having to come on - and fall behind courtesy of Gaku Shibasaki's spectacular strike for Getafe.

Paulinho's €40million move from Guangzhou Evergrande last month raised eyebrows, but Valverde made a point of praising him and Suarez as well as Deulofeu's impact off the bench after a fourth straight league win.

"We wanted to break through the lines, to go deeper," said Valverde. "If not, we would have kept crashing into a wall.

"Deulofeu was daring in the one against ones, Denis was cool with his passes and his goal and Paulinho was successful with his power.

"Scoring is important for them [Suarez and Paulinho] as individuals, it gives them both confidence.

"It also shows that the squad has depth and that we have a lot of players who can contribute - and that includes players that aren't here.

"[All three of the subs] can get forward and they have goals in them. We had not rotated much from Tuesday against Juventus. Those who came on gave us freshness and end product.

"Whether it is one player or another, what serves us well is to know that we are capable of reacting."

Come on 3 very important points to follow up!!!!! Congratulations September 16, 2017

Valverde would not claim the credit for changing the game, adding: "There will be many times when you make a change and nothing happens or what you were thinking doesn't happen."

The Barca head coach agreed with the scorer of Barca's equaliser, Suarez, in feeling the pitch did not help his side as they struggled to reach peak form.

Valverde said: "The win strengthens us because it was tough going forward, they pressed us well and it was hard to create danger. They closed us down well and squeezed us.

"We struggled because to be honest we weren't playing that quickly, although the pitch didn't help either. It was dry and the ball didn't run too much.

"But regardless of that, we tried to turn things around. The opposition put us under pressure but this comeback reinforces our belief that we are indeed capable of reacting to difficulty.

"We showed the perseverance to keep pushing forward and to turn the game around."