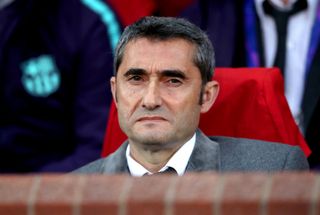 Barcelona coach Ernesto Valverde warned his side still have work to do to defend their LaLiga title despite boasting a nine-point lead with five games to go.

Barca ground out a hard-fought 2-1 win over Real Sociedad on Saturday night, turning to the unlikely scoring duo of Clement Lenglet and Jordi Alba to see off their battling visitors.

The three points move treble-chasing Barca another significant step closer to the crown as they responded to Atletico Madrid’s 1-0 win at Eibar earlier in the day.

“Today was always going to be a very important game and we have nine points left until we’re champions, but it’s very difficult to win,” Valverde said in comments reported by Marca.

“I know that people say we’re already champions, but we’re not.

“We have to go game by game to win until the end. This is not over, not until we get to the last game is everything done. It will always be difficult.”

Barca were a long way from their best against Sociedad, with Valverde admitting they struggled to find their rhythm after victory over Manchester United in the Champions League in midweek.

“When there is a game like the one against Manchester United, which is the centre of attention, you then have to get back to remotivating the team for another game which is fundamental,” he said.

“The games after Champions League matches are difficult for us. The game was uncomfortable, as they played well and tried to bring the play out from the back. We could not bring it out as we wanted to.

“We lacked a spark and freshness to be able to settle the game.”