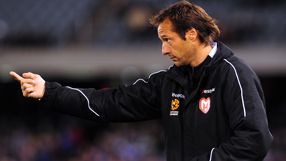 The Canada-born 48-year-old replaces Ignacio Ambriz who resigned mid-week as Johan Cruyff's influence grows at the club since his appointment as consultant in February.

"The company responsible for the Chivas sporting project, headed by Johan Cruyff, has chosen John van't Schip to fill the post of coach from the next Apertura championship," Guadalajara said in a statement.

Ambriz left the club after a run of six defeats in the league and Libertadores Cup. His league record since taking charge in January was four wins and three draws in 12 matches in the Clausura championship.

The Apertura, first of two championships in the Mexican season, kicks off in August.

Chivas were beaten 1-0 at home by local rivals Atlas in their derby in the western Mexican city on Saturday, losing all hopes of a place in the championship quarter-finals.

The top eight teams in the 17-match league phase of the championship go into the knockout rounds for the title. Chivas are 15th with 15 points from 16 matches.

Van't Schip, a former Ajax and Genoa winger who was a member of the Netherlands' European Championship-winning squad in 1988, has worked as an assistant coach at Ajax and with the Dutch national team. He has also coached Twente Enschede and Australia's Melbourne Heart.

Guadalajara are Mexico's most popular and successful club with 11 league titles, their last in the 2006 Apertura.