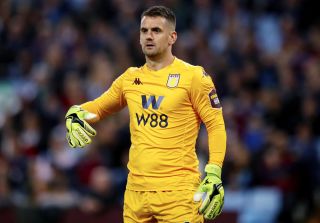 Goalkeeper Tom Heaton knows Aston Villa must be prepared for a hostile derby with Wolves.

Villa are aiming to reach the Carabao Cup quarter finals when they host their local rivals on Wednesday.

Wolves are unbeaten in their last eight games in all competitions and seeking their first win at Villa Park since 2011.

And Heaton is expecting fireworks with a place in the last eight up for grabs.

“The lads have been talking about how hostile that will be. A local derby, under the lights, it’ll be a great atmosphere,” he said.

“It’s a big game in midweek, one we’re looking forward to and we want to go as far as we can in the cup.

“There is definitely some learning going on. It’s been a rock-solid start.

“A good foundation. We’ve been unlucky not to come away with points in some games. Those fine margins are what we are learning as we go.”

After the weekend’s 3-0 defeat at Manchester City, Villa also welcome leaders Liverpool in the Premier League on Saturday.

They are 15th in the top flight and Heaton feels facing the division’s top two in quick succession can benefit the team.

“There are things we can take (from Manchester City). That added belief. It’s the first time coming to City for a lot of the lads,” said the England international.

Jack Grealish is likely to sit out on Wednesday after receiving a kick to the calf at the Etihad.

Jota is a couple of weeks away from returning to full training after hernia surgery while James Chester has stepped up his recovery from a hamstring problem but is not yet ready.

Jonathan Kodjia is also close to returning from a fractured cheekbone.