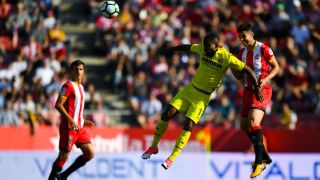 The 26-year-old striker has been in excellent form for Villarreal this season, scoring nine goals in 15 LaLiga appearances.

Reports began to circulate on Tuesday that Guoan had tabled a €40m offer, which Villarreal would have to reluctantly accept as it is understood to be the value of the release clause in his contract.

Speaking to reporters, Calleja said: "It's not the best thing that could have happened to us.

"But a lot of clubs have expressed an interest and, in this case, a club came along who were willing to pay our player's buy-out fee. and when that situation arises, there's really not a great deal you can do."

Villarreal found themselves in a similar position last January, when Alexandre Pato joined another CSL side in Tianjin Quanjian for €18m.

Nevertheless, should the sale of Bakambu go through, it will prove a remarkable deal for Villarreal, who only paid Bursaspor a reported €7.4m for the striker in August 2015.

Speculation suggests that unsettled Everton forward Sandro Ramirez could be identified as a potential replacement.