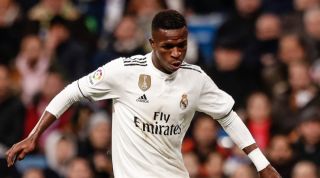 Vinicius was overlooked again for Wednesday’s 0-0 El Clasico draw away to Barcelona, as he was an unused substitute.

El Desmarque reports that the forward has become fed up with his lack of game time and asked Zidane for an explanation on the return journey to the Spanish capital from the Camp Nou.

His options outside of Madrid are growing too, with several English clubs showing interest, but the Brazilian wants to wait until the end of the season before making a decision on his future.

Chelsea, Manchester United, Arsenal, Tottenham and Wolves have expressed interest in signing Vinicius for next season, with the Premier League looking like his most likely destination if he leaves the Bernabeu.

He has options outside of England as well, as Inter Milan, Roma and PSG are also keen on the winger.

Vinicius has scored two goals in 14 appearances in all competitions this season and although Real Madrid remains his priority for now, he is considering seeking a move elsewhere to earn more minutes.

The teenager joined the Spanish giants for £38.7 million from Flamengo in the summer of 2018, a record fee for a player aged under 19.

QUIZ! Can you name every Arsenal player with 10+ Premier League goals?

ANALYSIS No, Liverpool's new signing Takumi Minamino has not just been 'bought for shirt sales'