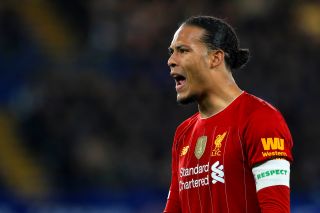 Virgil Van Dijk has fired a Premier League warning shot that champions-elect Liverpool can get better.

The imperious Holland centre back is itching to drag Liverpool across the line to their first top-flight title since 1990 – but insisted Jurgen Klopp’s men still have plenty more thirst for trophies.

The league resumption will allow the Reds to round off a remarkable domestic campaign, and Van Dijk believes sealing the title can help Liverpool reach yet greater heights next term.

“With two wins, we will be champions; but it doesn’t stop there,” Van Dijk told the Mail on Sunday. “We want to keep going, we want to take it into next season as well because that will start pretty quickly after the last game of this season.

“The manager spoke to us as well and said that what we do in these last nine games will set the tone for next season as well.

“We can be a team that can keep progressing. We have players who can progress and make big steps in their development. Winning the league would be a big experience that could take them to the next level.”

Liverpool are gearing up for their return to league action with a Sunday night trip to Goodison Park for the small matter of a Merseyside derby.

While the closed-doors nature of the league’s return continues to provide eerie backdrops, Van Dijk and company already have eyes on the ultimate prizes in both the short and long term.

And the 28-year-old insisted Liverpool will go all-out for multiple Premier League crowns now that their first is finally again within touching distance.

“If we win the title this season, we will try to retain it,” said Van Dijk. “That’s what we are aiming for but everyone knows how difficult it is to retain the title, especially in England and we are not there this season yet.

“We tried to retain our Champions League title and it wasn’t possible. It’s very difficult.

‘We will try to focus on the nine games we have left but we hope to set the pace for the rest of next season with the title behind our name and defend the title as well.”