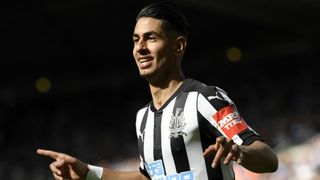 Newcastle United playmaker Ayoze Perez found the net eight times in the Premier League last season and he has already whetted fans' appetites for the new campaign with an outrageous goal in training that left goalkeeper Rob Elliot embarrassed.

Perez shared a video on his Twitter account that showed Newcastle's players training ahead of their pre-season friendly match against Dublin-based club St Patrick's Athletic.

The clip showed Elliot pulling off a good save from a team-mate's header before the ball rolled to Perez, who – while running away from the goal, kicked the ball onto his left heel with is right foot and sent it looping over the goalkeeper and into the top corner.

The Spaniard's tweet included a cheeky jibe at Elliot, saying: "Next time maybe you can save it."

When you gotta find new ways to score... , Does it counts for the goal of the season contest? , next time maybe you can save it July 17, 2018

Not to be shown up, Elliot hit back with a jibe after the friendly match, which Newcastle won 2-0, telling Perez: "You should have saved it for tonight."