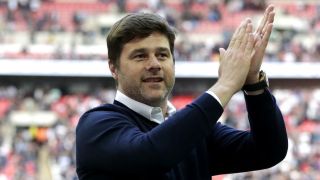 Mauricio Pochettino laid down a clear challenge to Tottenham's hierarchy by urging the club to be "brave and take risks" as they look to bridge the gap to the Premier League's big spenders.

Spurs finished the campaign with an enthralling 5-4 victory over Leicester City in their last game at Wembley ahead of moving to their new stadium on the site of their old White Hart Lane ground, Erik Lamela and Harry Kane each scoring twice in a pulsating end-of-season fixture.

The dramatic win, which was achieved despite the Foxes going 3-1 ahead, ensures Spurs finish third in the table, but the critics have once again sharpened their knives at Pochettino's failure to land a trophy.

There has been speculation that Pochettino may not be at the helm next season and the Argentine laid down the gauntlet to chairman Daniel Levy to invest in his "crazy ideas" if they are to regularly compete.

"We are thinking now we need to make our new stadium home and we know it will be tough in the beginning to settle there," he told a post-match news conference.

"I have a very clear idea of what we need to do. I don't know if the club will agree with me or not, but we are going to talk next week to create what I think we need to do together to improve.

"Until today it was so difficult to talk about the future, but from now we need to decide the way and how we are going to operate in the future.

"Our fans need to know what we are going to do and our fans need to feel the reality of the club and we need to tell the truth and create a very good expectation we can achieve. We cannot create dreams that we are not going to achieve.

"The first step is to be close and challenge the sides who invest more than us and find a way. We need to think our reality is different and our fans need to think and be happy and support us because we are not a club who will spend crazy money.

"I think Daniel is going to listen to me, but you know sometimes I might have some crazy ideas. With our unbelievable fans, sometimes you need to be brave and take risks. I think the club is in a moment where they need to take risks."

Pochettino, who confirmed that centre-back Jan Vertonghen missed out as a precaution with a tight calf, hailed his side for their fighting performance.

"That final game, it was such an exciting game. I think it was a crazy game. A lot of emotion during the game but in the end we achieved the victory and achieved third position in the table," he added.

"Still we need to improve one step more to try to fight for winning big trophies, but I think we are in a very good way."