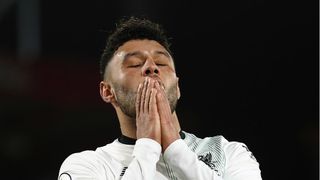 Arsene Wenger has suggested Alex Oxlade-Chamberlain should have stayed at Arsenal to fight for his place rather than move to Liverpool.

Oxlade-Chamberlain, who had a year remaining on his Arsenal contract, signed for Liverpool in a deal worth £40million after the Reds demolished the Gunners 4-0 in the Premier League in August.

Arsenal will have a chance to get revenge at the Emirates Stadium on Friday but this time Oxlade-Chamberlain will be on the opposite side.

The 24-year-old has struggled for regular game-time after switching to Anfield, starting only five matches in the Premier League and losing his place in the England squad, leading Wenger to question Oxlade-Chamberlain's decision.

"Is he sure of a place there?" Wenger said at a pre-match news conference. "That's the answer. You are sure nowhere. In a big club, you have big competition for every single place. That's absolutely normal.

"Look, he had one year to go. At the start of the season we had four players with one year to go [Oxlade-Chamberlain, Alexis Sanchez, Mesut Ozil and Jack Wilshere]. I wanted him to extend his contract, yes. He decided to go. We respect that but at the end of the day, I decided to sell him.

"I believe that he made this decision and we had to find a compromise to get the best possible transfer from it. That's part of it. I personally think he will be an important player for England and that he will continue to develop.

"What do you want – to be a big player and not fight? What do you want on top of that, sitting in a rocking chair saying 'I'm a big player - I don't need to fight'? It does not work like that. Every player can do that and he does it so overall I am convinced it is part of being a top player."

Since a 6-0 thrashing of BATE Borisov in the Europa League, Arsenal have scored just three goals in their last four matches in all competitions.

And Wenger believes there is more to come from a star-studded front line made up of Sanchez, Ozil and record signing Alexandre Lacazette, the team's top scorer with eight Premier League goals.

"It is very simple if you look at the mathematics," Wenger said. "Who is the team who created the most chances in the League? Arsenal. Have we scored the most goals? No.

"That means there is a deficit between the expected goals and the number of goals we scored. That is a bit in cycles sometimes and maybe we have to find solutions to be a bit more efficient.

"I just say we are a team who likes to go forward and create chances and we do create chances. I do not want to put too much pressure on our strikers because I believe they have the ability to score.

"So, let's just maybe hope that we can do more with set-pieces, be more efficient – there are plenty of aspects we can work on that we can improve."