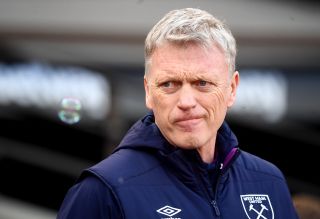 David Moyes insists West Ham would not have preferred an early conclusion to the season.

The Hammers get their restart under way against Wolves lying just outside the relegation zone and would have stayed up had the campaign come to a premature end.

West Ham vice-chair Karren Brady even called for the season to be declared ‘null and void’ as early as March.

Instead the survival battle resumes on Saturday evening and, when it was put to Moyes that the club may have favoured an early finish, he was unequivocal in his response.

“I think you are completely wrong there,” said the Hammers boss.

“We can’t wait to get started and play football again. But we wouldn’t have played if it was going to cost people’s lives.”

Europa League hopefuls Wolves went into the enforced break on a five-match unbeaten run, but Moyes denied now is a better time to play them.

“I think Wolves have done remarkably well,” he added. “But I think it would have been better if we had played them after they had come back from Greece, from playing Olympiacos.

“That’s a long trip, I’ve been there before and it’s not an easy trip.

“But ultimately you have to play each team twice, away and home.

“We have got a lot to play for and so have Wolves, but in my mind it is not as big as what we are playing for at West Ham.

“We have had 12 weeks off too, to work with the players. I’ll look at it that way.

“Everyone respects Wolves as a team, it’ll be a tough game, but we are in a period where we are unsure what is going to happen.”

The break in the season has given West Ham’s long-term absentees Jack Wilshere, Andriy Yarmolenko and Ryan Fredericks the chance to return to fitness.

“We were very encouraged with how the players were looking (before the lockdown), we had really got some momentum.

“I only came in between Christmas and January, so in many ways it has given me a chance to work more with the players.

“We have tried to be on the front foot at every opportunity to get them in, work with them, hopefully we can benefit from that and we can show it on the pitch. There is more for them to show than they have done recently.”