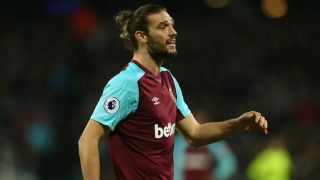 Andy Carroll and Winston Reid will both be sidelined by injury for at least three months, West Ham have confirmed.

The key pair suffered setbacks in their recoveries from respective ankle and knee problems during the club's pre-season training camp in Switzerland.

They have returned to London ahead of schedule and will undergo operations.

The setback comes as particular blow to Carroll, who is entering the final year of his deal at London Stadium.

Manager Manuel Pellegrini confirmed the Hammers will remain active in the transfer market in search of reinforcements, with Felipe Anderson reportedly on the verge of joining from Lazio.

"We are obviously very sad to hear that Andy and Winston have suffered setbacks," Pellegrini said.

"This is a big blow for them and us, but we hope to see them back in action as soon as possible.

"It does mean that we have lost two players in key areas, though, and we'll continue to work hard with the owners to make further additions to strengthen the playing squad, beyond the five new signings already confirmed."

West Ham announced the acquisitions of Jack Wilshere and Andriy Yarmolenko earlier this week and have also added Issa Diop, Lukasz Fabianski and Ryan Fredericks to their ranks.