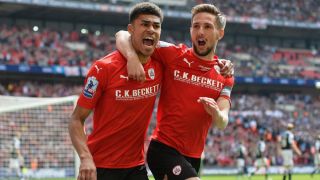 West Ham have announced the signing of striker Ashley Fletcher on a four-year deal from Manchester United.

The 20-year-old, who spent part of last season on loan with Barnsley in League One, completed a medical with Slaven Bilic's side on Tuesday before finalising the move.

"I am very excited to be here. West Ham are a massive club and I am just happy that I can come and further my development here at West Ham," he told the club's official website.

"I think it is a club with a lot of ambition. They have a lot of good players and it was a special final season. They managed to finish the campaign very well.

"West Ham are a club built on traditions of giving youngsters a run and hopefully I can get my chance as well."

United and West Ham must now finalise the details of his transfer, with Fletcher's contract at Old Trafford having expired at the end of last season.

"Everyone at Manchester United would like to wish Ashley the best of luck in his future career," United said in a statement confirming the news.

Fletcher, who scored in the League One play-off final win over Millwall, follows Havard Nordtveit, Sofiane Feghouli and Gokhan Tore in joining West Ham since the end of last season.

He is the third player from United's youth academy to leave the club on Tuesday, after Tyler Reid joined Swansea City and Joe Rothwell signed for Oxford United.