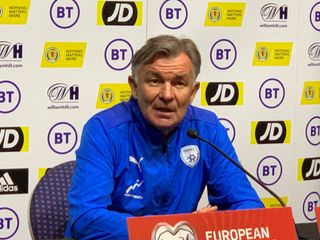 Israel boss Willi Ruttensteiner is not getting too encouraged by Scotland’s Covid-19 woes ahead of their Euro 2020 play-off semi-final at Hampden Park on Thursday.

Steve Clarke’s plans were left in disarray after Stuart Armstrong returned a positive test for the virus.

Due to being close contacts of the midfielder, Kieran Tierney and Ryan Christie – along with one physiotherapist and one masseur – were required to self-isolate for 14 days as of Tuesday and will also miss the matches against Israel and the Nations League matches against Slovakia and Czech Republic.

Scott McKenna, Liam Palmer and Oliver Burke are also out through various injuries.

Ruttensteiner said: “For me as a coach, the most important thing is to focus on my team because it’s very dangerous to think about players who are not here.

“At this time, for every national team and every club side, replacements often come in who are better than the other players so we will stick to our principles and concentrate on ourselves.

“Scotland is a football nation with many good players.”

Israel have not been to a major finals since the 1970 World Cup in Mexico and Ruttensteiner is hoping his side take the chance to make history, although he is expecting another tight game.

He said: “I hope that it is a close game. We are the underdogs but if we can challenge Scotland to the end or even in extra time then, in a semi-final, even underdogs have a chance.

“We want to take that chance and I agree that one mistake or one moment of brilliance could make the difference.

“We want to do something for the country of Israel.

“You can feel the atmosphere, the players are very motivated to do something perhaps historical. This would be great.”

Hampden Park was sold out for the original date in March before football was stopped due to the coronavirus crisis, but the national stadium will again be empty, which pleases Ruttensteiner.

He said: “Without fans, I think it’s an advantage for us. It’s so difficult with the Scottish fans to play against Scotland here.

“This is an advantage but on the other side, of course, the motivation from all involved, players, staff, coaches is very high, and in this semi-final in this decisive game, always the detail decides and I hope we can do it with a good performance.

“I am absolutely sure that we have to improve our performance from the last game. Otherwise, I think we have no chance.”