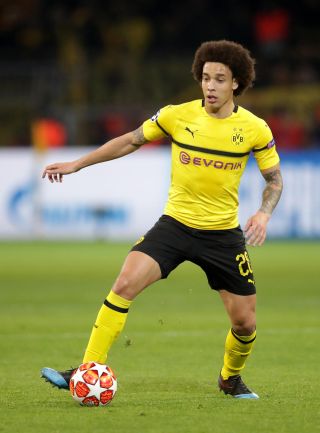 Axel Witsel hopes Borussia Dortmund can produce a performance to put their home win over Bayern Munich in the shade against Ruhr derby rivals Schalke at Signal Iduna Park.

Lucien Favre’s side, unbeaten at home so far, could go back to the top of the Bundesliga with victory, as Bayern are not in action until Sunday’s trip to Nurnberg.

Dortmund got the better of Bayern 3-2 at home back in November, to seemingly lay down an early marker in the title race before Niko Kovac’s men slowly regained momentum.

Midfielder Witsel would relish another memorable home success against Schalke, who are scrapping for points at the other end of the table.

“Against Bayern the mood was already extraordinary, but the game against Schalke will certainly put this experience in the shade.”

“How important a derby victory is, I understood at the moment when we came back to Dortmund on December 8, (when) we won 2-1 at Schalke,” the midfielder said.

“The fans were waiting for us at the training ground and they did not stop singing and cheering.

“We came out of the bus – right in the middle of the fray. In those few minutes, I knew what a derby victory means to everyone.”

Favre will not read too much into the lowly league position of their Ruhr rivals.

“The last few games against Schalke have been very tight, they can be very dangerous and should not be overlooked,” he said at a press conference.

“We can’t deny the fact that they are fighting for the title and we are playing for something completely different,” Stevens said.

Stevens knows it is not good just looking to ride out the expected wave of Dortmund attacks.

“We will have to concentrate for the whole 90 minutes. We can’t sit too deep though. We have to try and have an attacking impulse too,” Stevens said, quoted on the Schalke website.

“We have played well in parts (during recent games), but then things have fallen apart.

“I hope that the lads who play on Saturday will know what is required.”

Nabil Bentaleb will also not feature as the Algerian midfielder has been training with the U23s again following another breach of team regulations.

“I don’t want to discuss the details, but I didn’t just make this decision for no reason,” Stevens said. “It’s a shame, but there was no other way.”