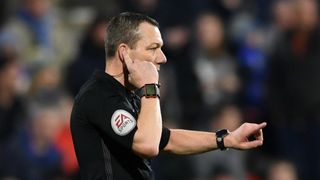 The provision of the incorrect image to broadcasters led to confusion over a VAR decision in Manchester United's FA Cup win at Huddersfield Town, says a company involved in the technology.

Juan Mata thought he had doubled United's advantage in Saturday's fifth-round tie at the John Smith's Stadium, only for the decision to be referred to the VAR system.

Misleading graphics showing seemingly wobbly grid lines were displayed by broadcasters in the immediate aftermath, with Mata's strike eventually correctly ruled out for offside as his kneecap was narrowly beyond the line of the last defender.

But the long delay for the decision to be confirmed, in addition to the bizarre irregular lines on the graphic shown by broadcasters, led to criticism of the VAR technology, which is being trialled in the FA Cup.

On Sunday, Hawk-Eye Innovations sought to explain why the grid lines shown on BT Sport's television coverage did not appear to be straight, with a kink in the line initially indicating Mata was onside.

"A technical issue led to an incorrect graphic being provided by Hawk-Eye to @btsportfootball last night," the company said in a statement posted on Twitter.

"This was a case of the wrong image being provided to the broadcaster and we apologise."

A technical issue led to an incorrect graphic being provided by Hawk-Eye to last night. To confirm, the saw the correct image with the correct lines to make the decision. This was a case of the wrong image being provided to the broadcaster and we apologise. February 18, 2018

After the match, Mata said he was still "up for" VAR being used in English football despite seeing his goal ruled out, while United manager Jose Mourinho suggested the offside call was too tight to use the technology.

"The feeling is amazing when the truth comes, but there are problems, like what happened today," he told a news conference.

"Protocol says it needs to be a 'clear and obvious' situation and it was not clear or obvious. But we know it is experimental and I am speaking after a 2-0 victory.

"I think it should be the referees to decide. Do they want it, do they feel happy with it and do they want technological help? Or do they want to live with the mistakes they make as humans?"